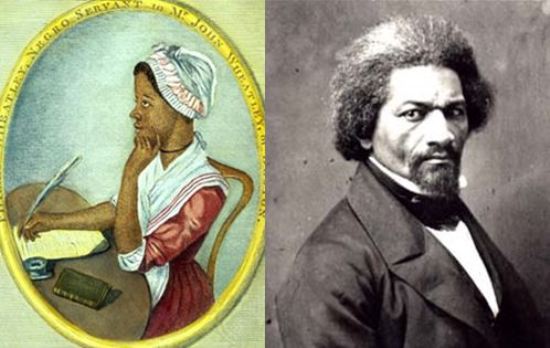 Among the many poems we read during the first week were Phillis Wheatley's "On Being Brought from Africa to America" and Robert Hayden's "Frederick Douglass." I asked the students to write short responses to the poems in any form or mode of writing that they liked.

What follows are a couple of responses:

This is an interesting poem you've written here--I can see you are talented with the pen! Although, I cannot help but to read your words as anything other than satire. Thank you for demonstrating that African American women are educated, creative, and thoughtful at a time this was thought to be untrue.
Respectfully,
Asia M.

Reading Robert Hayden's poem "Frederick Douglass" is reassurance that Douglass's relentless efforts as an abolitionist were not in vain. In a broader perspective, it demonstrates the transcendence of appreciation for what Douglass symbolizes, which is an unwavering determination to obtain freedom and enhance the value of black lives. Douglass and others like him who were strong in their fight deserve to be respected as legends and way makers for the brave decisions they made that proved to be impactful well beyond the time periods in which they lived. --Bianca Y.