We began our 2012 African American Literatures and Cultures Institute (AALCI) on June 3 with a welcome reception. Over the weeks, we have participated in a number of activities. What follows are brief write-ups on some of our projects:

On Friday, June 15, thanks to the generosity and foresight of Deborah Thomas, assistant to the Dean of the College of Liberal and Fine Arts and our institute founder/director Joycelyn Moody, our Fellows received the special opportunity of spending time with Harriet Kelley at the San Antonio Museum of Art (SAMA). Mrs. Kelley is a museum trustee and more notably, she and her husband Harmon Kelley have amassed one of the largest personal collections of African American art.

The Kelleys became interested in collecting works decades ago before large numbers of major museums showed much interest in including works by talented and historically-significant black artists in official collections. The Kelleys read books, studied and identified works by various artists, and traveled across the country to observe and purchase rare African American artworks.

On Friday evening, Mrs. Kelley gave our Fellows a private tour of African American works exhibited at SAMA. A number of the prominent works in the museum's collection were donated by the Kelleys. Our group viewed and learned about works by Edward M. Bannister, P.H. Polk, Edmonia Lewis, Jacob Lawrence, Romare Bearden, Joshua Johnson, Henry O. Tanner, and others. What important lessons and notes we received from Mrs. Kelley concerning African American artworks composed during the early 1800s up through the 1960s.

Listening to Mrs. Kelley discuss the many journeys that she and her husband took as they sought to develop their collection was just as important. It was an extraordinary moment to have access to such a prominent collector of black art. Who knows how many more African American works and artists would have been lost to history if the Kelleys had not developed their passionate interest in collecting?

At the end of the tour, Mrs. Kelley asked if there were any questions. I certainly had one query in mind: "What had we done to earn this wonderful opportunity to meet with such a crucial collector?" I decided to keep the question to myself, but it's still circulating in my head.

On Friday, June 15, scholar Doveanna Fulton made a presentation for Fellows. Professor Fulton, who has recently accepted a position to become Dean Fulton, discussed how she became interested in studying historical literature.

Among other factors, a key moment along Fulton's scholarly journey occurred early on when she took a literature course with Gabrielle Foreman, a literary historian and specialist in 19th century African American literature. Fulton was quite impressed with Foreman, who provided guidance, advice, and inspiration on how to pursue a career as a professor and scholar. Listening to Fulton discuss Foreman's assistance and influence clarified the extents to which the appearance of a good teacher in a student's life at a key moment can make such an important difference.

On Friday, June 15, Texas Christian University (TCU) literature scholars Mona Narain and Sarah Robbins met with our Fellows to discuss the graduate program in English at their university and graduate school in general. All of us were quite impressed by their presentation and the opportunities available at TCU.

Prior to the visit from Narain and Robbins, I was getting the sense that some of the Fellows were becoming somewhat exhausted or burnt-out from continually scrolling through dozens of graduate school web pages to investigate potential programs. Our TCU guests, however, offered a break from the virtual and limited interface of the web and facilitated a real-life, lively, and interactive conversation about applying to graduate school.

Narain and Robbins began by asking each of our Fellows what they were looking for from a graduate program. Beginning with that question and listening to our group's responses ended up being an important starting place for the wide-ranging discussion that followed. In addition to offering a strong case for why our Fellows might consider applying to TCU, Narain and Robbins offered advice on how to produce high quality application packages for any graduate programs.

On June 12,  Elizabeth Cali, Allegra Castro, Christina Gutierrez, and Erin Ranft, four emerging scholars all based at the University of Texas at San Antonio, organized a presentation that focused on Zora Neale Hurston's short story "Sweat."  The presentation provided our Fellows with an opportunity to follow along as a group of advanced graduate students applied critical lenses to a common literary work.

Cali, Castro, and Ranft discussed different approaches to understanding Hurston's work and offered multiple entries into discussing short stories. Cali concentrated on the publishing history of "Sweat" and brought a facsimile of Fire!! -- the magazine where the story originally appeared. Ranft led a discussion about genre, and prompted the Fellows to consider the implications of thinking about Hurston's story as African American literature, Women's literature, American literature, and within the context of other categories.  Castro, who is pursuing research on satire, encouraged the group to seek out instances of "humor with attitude" in "Sweat."

Along with providing us with alternative ways of viewing the story, the presentation offered a model for scholarly interactions and a collaborative knowledge-building activity between undergraduates and graduate students. The presentation may have offered our Fellows with a glimpse of their future selves. 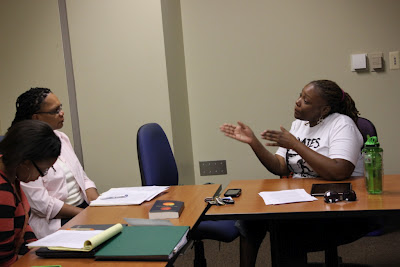 Few African American literature scholars have developed the kind of following that Professor Kinitra Brooks has. In addition to learning about works by Zora Neale Hurston, Ralph Ellison, Toni Morrison, and bell hooks, students at UTSA who enroll in Professor Brooks's courses have the advantage of also studying the cultural implications of comic books, the racial anxieties of horror, and the gendered nuances of zombie movies.

On June 13, Professor Brooks met with our Fellows to discuss her developing book project related to the presence of African Americans in horror movies. Brooks discussed the opportunities and barriers associated with producing scholarship on pop culture.  She also shared a recent draft of her book proposal with the Fellows and facilitated a conversation about approaches to researching and writing.

Brooks's presentation provided our group with a close view of the early writing stages of scholarly project. They also received the participate in a discussion about drafting and revising processes. The presentation was a key hands-on activity for our Fellows. 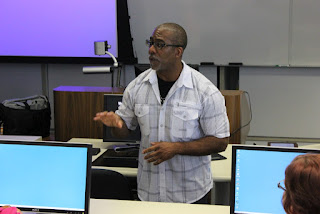 June 7 and 8, Literature scholar and techno-guide-extraordinaire Bryan Carter led workshops with our Fellows related to various online applications and how they might incorporate technology into their academic activities. Carter visited our institute in 2010 and 2011, and has always offered a range of insight and entries into the latest in what we should be up on related to technology.


This year he introduced us to more than a dozen applications, including Layar creator, Zotero, Vokle, Qik, iPadio, Spreecast, Spreaker, Dropbox, evernote, mixlr, sidecar, and bambouser. Carter also led the Fellows on a tour of Virtual Harlem on Second Life. Our movements over the course of those two days with Carter were, as usual, a whirlwind of activity and quite useful for expanding our sense of what's possible with technology. 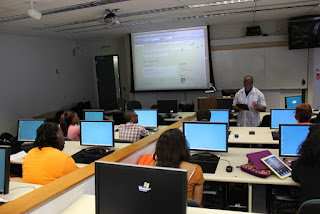 What has been especially notable to me having observed Carter's presentations for three years now has been how up-to-date he remains on the latest technological applications and gadgets. Each year, he introduces a new batch of at least a dozen applications.  It's fascinating and inspiring to witness the results of a scholar's interest in continually knowing what's new and useful out there.

African American literary scholars and Black Studies scholars could learn a lot from the processes of sharing and staying on the cutting edge that seem central to the tech communities to which Bryan Carter belongs. 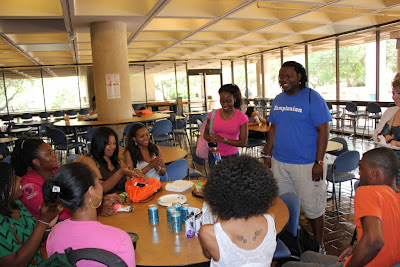 For the last couple of years, at least one of our Fellows celebrated a birthday during the course of our Institute. This year, two of our Fellows turned 21 on  June 4. Institute founder/director Joycelyn Moody arranged a small surprise reception for us to celebrate the two Fellows's birthday.

The reception came at the end of our first full day of the program. What better way to get started than with a surprise cake and ice cream?

On Monday, June 4, we made our annual visit to John Peace Library at UTSA to meet with reference librarian Tara Schmidt and rare books librarian Juli McLoone. As always, Schmidt and McLoone helped to empower our fellows to better understand the possibilities for research.

Our group participated in two exercises focusing on library research and presentations. First, McLoone led the group in an activity that focused on materials associated with the Sterling Houston Papers. Schmidt led an activity concentrating on utilizing the library's online material to develop small presentations with the online application Glogster.

In addition to their formal presentations, McLoone and Schmidt have provided our groups with useful assistance over the years solidifying research projects. They listen as our Fellows discuss their projects, and then they begin raising questions and offering suggestions for using library resources, which really assists us in gaining a sense of direction with our various research activities. 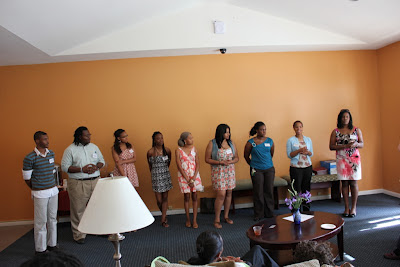 Sunday, June 3, We opened the third year of the African American Literatures and Cultures Institute (AALCI). Our program founder, Joycelyn Moody has made it happen again.