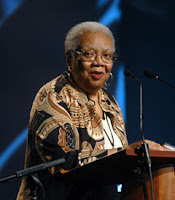 So this summer, we'll see if can cover about 100 poems by black poets. It'll be about quality and quantity. The typical succinctness of verse will make it possible for us for us to cover a large number of poems in about a month. 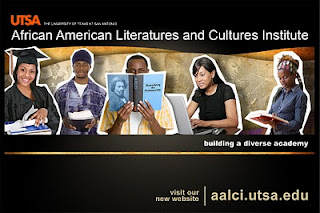 Here's the front of our program postcard. We also used the image as the front-page of our web site. The postcard image and web site were produced by Tristan Denyer, a talented designer who's created all kinds of wonderful works for Black Studies @ SIUE. Check out his print portfolio or his web portfolio.

Our work with Tristan on the designs of the web site and promotional material for the AALCI was crucial in our overall development of the program. Tristan pushed us to translate our visions for the AALCI into formats that were compatible for the audiences we wanted to reach. The processes helped us clarify what we wanted to communicate in efficient visual and linguistic language.
Posted by H. Rambsy at 7:59:00 PM No comments:

Welcome to the blog site of the African American Literatures and Cultures Institute (AALCI). Here's where we'll share ideas and present short reports on our thinking and projects during the course of the summer.

The AALCI began with some visionary plans from professor Joycelyn Moody, who noted in one interview that she's hoping to "create a pipeline across the nation’s universities so that the subfield of African-American Studies within the English departments remains vibrant.”

This summer, we'll begin a crucial aspect of building that pipeline by working with a group of Institute Fellows.