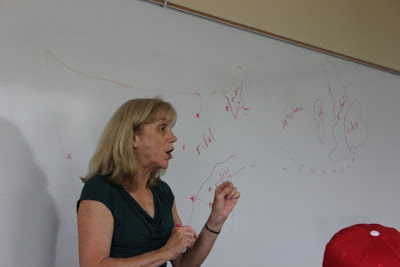 She's visited in 2010, 2011, and 2012, so of course we had to have her back again this year. Professor Bridget Drinka stopped by to meet with our group this year to talk linguistics, sociolinguistics, the histories and migrations of speech, the New York subway announcers, and of course those whole Rful and Rless patterns.

I've been trying to figure out or perhaps quantify why the 30 students who have participated in our program have found Drinka's presentations so compelling. Maybe the answer is in the data. Or more specifically, perhaps the expanded body of data and metadata that she presents the students with draws their interest.

For one, she offers fascinating, short research stories, telling narratives about linguistics with key characters such as William Labov, often considered the founder of sociologlinstics, the different people he studied, and John Baugh, a student of Labov and former professor for Drinka. She takes on different regional dialects from England and Ireland to various places in the U.S. At moments, she highlights her own speech patterns from Illinois where she was born; she highlights her accommodations of Texas speaking pattern where she lives now; and for the purposes of her discussion, she emulates speech patterns of people from Massachusetts, New York, and Georgia.

Each year, she'll pick up on the side conversations the Fellows are having about a popular phrase from a rap or R&B song and then attempt to pronounce the piece as the students do. They always get a kick out of her attempt. I always take note that she works to absorb a speech pattern or phrasing that might be unfamiliar to her. 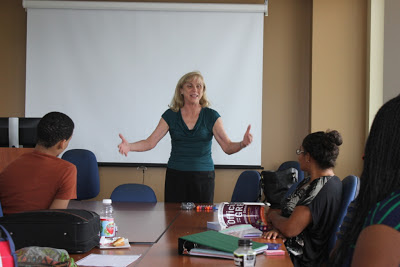 Beyond the verbal, she draws images on the board--shapes to represent countries and arrows to signal the travels of peoples and language practices. She pauses at moments to ask students where they are from so that she can mark their places with stars on the map that she draws. She returns to those stars during the course of the presentation to pose questions to Fellows about how people from their areas speak. She also writes the names of people and key terms on the board: Labov, covert prestige, and monophthongization.

Finally and throughout all of this, there are the body movements, facial expressions, and hand movements. She gestures, poses, points, emulates others, stretches her arms wide to show expansiveness, draws her arms in to signal closeness. Her physical movements and expressions are synced to the changing paces and pitches of her voice as well as to the contours of the narratives she presents.

Some folks refer to her as a English, linguistics professor. Others of us know the truth: Bridget Drinka is a multi-data artist and storyteller.