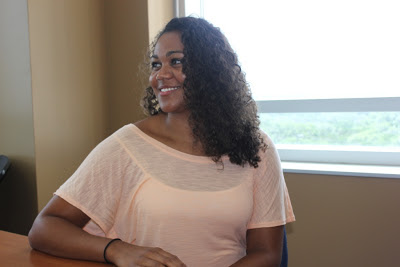 By Kevin Morris and Khadeidra Billingsley

Thirteen times. That is how many times Lauren Barnes used the word “diversity” while she was giving a brief overview of her life and motivations. As a Polish and African American woman, Lauren’s biracial identity played a significantly large role in her decision to link the literary and scientific realms and become a double major in English and Geobiology at Pennsylvania State University. Amazing, right?

In a moving -- literally -- discussion of the tragic mulatto, Lauren presents in-depth knowledge concerning this particular fictional character’s plight with self-identity. She tells of how, during her childhood, “color was never an issue;” it was not until she became a young adult when she realized that others would use her racial identity, which many cannot identify, as a way to determine what kind of person she is. Unlike the tragic mulatto, Lauren is able to exist confidently and comfortably as a biracial individual and be proud.

Her passion for so many different subjects, including literature, spoken word, and the environment, motivates her to tackle the world and its problems one discipline at a time. “Communication is central to any change that we can foresee,” she says. Thus far, as is apparent by her enthusiasm, Lauren is a great medium through which this communication is occurring.