Responses to Malcolm X’s “Message to the Grassroots” 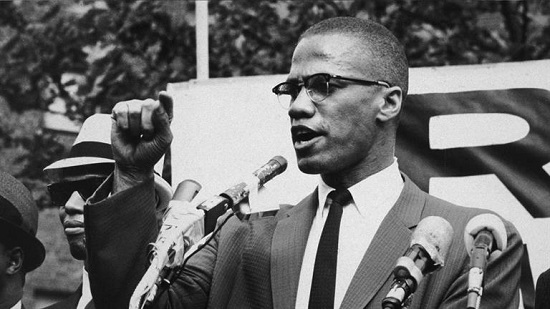 Yesterday, we read and listened to Malcolm X's "Message to the Grassroots." Later, we produced responses.

Re: Malcolm X’s “Message to the Grassroots”:

I, too, have told myself that America does not want me here. Yet, that begs the question of what this country would be if we were not around to work and remain silent?

I enjoy your rhetoric in regards to Pan-Africanism (last paragraph, first page). My concern is that in modern society having “African” as a part of your subtype is problematic in and of itself because there are many cultures that you have to consider. Being black is no longer universal, and we have to clean house before combatting the “white man”.

It's interesting that Malcolm X thought of revolution as a land-based war to be fought for "freedom, justice, and equality" when some black people might counter that fighting to be seen as a member of a land that was never yours seems futile.

For many black folks "independence" has often meant assimilation and simultaneous awareness of the systems that they do not benefit from in America. X does not seem to account for or support this DuBoisian consciousness.

I am amazed at the simplicity of one’s arrogance. In Malcom X’s “message to Grassroots”, speech in 1963 his rhetoric is full of red herrings and other logical fallacies that mislead, disorientate and lodge even greater wedges into the crevices of the Black community. In terms of the difference between the “field Negro” and the “house negro”, we’re both black and in the eyes of the oppressor: subpar, subhuman, beneath him.

Malcolm X's "Message to Grassroots" is a call-to-action for unity in the black community - both locally and abroad. Malcolm X makes a point in distinguishing modern-day "field negroes" leaders, who demand change and are amongst the people , from those "house negroes" leaders, who ask African Americans to "just suffer peacefully". Though Malcolm insists on his position being with the masses, his constant reference to his audience as "you" and use of the word "the negro" instead of "we" is problematic and can be read as Malcolm distancing himself from his demographic.

In “Message to the Grassroots”, Malcolm X uses a coffee and creamer analogy to highlight the lack of militancy the March of Washington held due to the “infiltration” and control of “the white man.” This analogy could easily be compared to the problematic complex of white allies in brown and black movements.